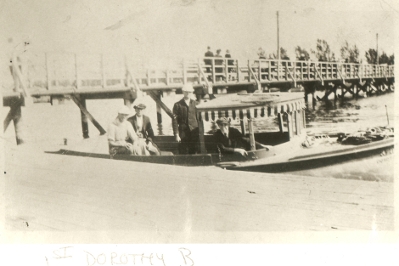 William Bradshaw, Captain Kevin's grandfather, was born in the late 1800s.  He was a house painter and in those days paint was made with a large concentration of lead.  In the early 1900s his doctor told him he had lead in his lungs and he should buy a horse or a boat to get out in the fresh air.  So, in 1918, he  bought a boat and named it “Dorothy B.” after his first daughter, Dorothy.  The picture to the right shows the first Dorothy B. tied up along Emmons Avenue in Sheepshead Bay, Brooklyn, New York. 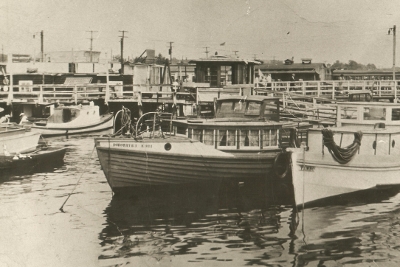 William's sons, Walter (Captain Kevin's father), Frank, and Joe loved being on the water and in the years leading up to the Great Depression, the Bradshaw family bought their second and third boats, each a bit bigger than the previous one and each named Dorothy B.  We don’t have any pictures of the second Dorothy B., but the picture inset left shows the third Dorothy B. (purchased in 1927) moored near a foot bridge in Sheepshead Bay. 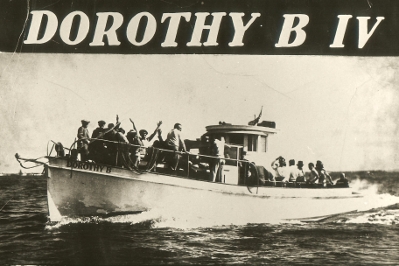 During the Depression years, people gave William fifty cents or a dollar to go out fishing.  According to Walter (Captain Kevin's father), “for fifty cents you’d catch a sack full of fish that was enough to feed your family for a week.”  And that’s how the Bradshaw family became involved in party boat fishing.  In 1931, they bought the fourth Dorothy B., a 45 footer.  The image on the right is from an advertisement for the boat back in the 1930s.  Notice the guy in the bow indicating the size of the one that got away! 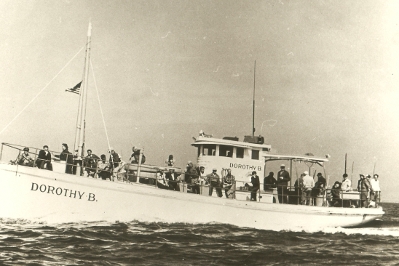 The picture to the left shows the fifth Dorothy B. purchased in 1950 when Captain Kevin was five years old.  By this time, Joe, Frank and Walter were running the business full time.  The guy wearing the beige cap standing slightly bent in front of the wheel house is Captain Kevin's father, Walter. 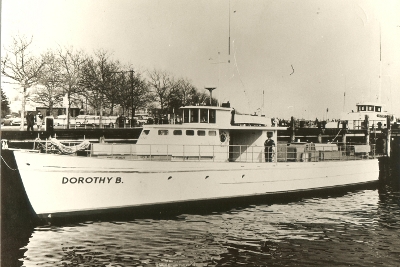 In 1963, the family bought the sixth Dorothy B., an 83 foot converted World War II subchaser.   The image to the right shows this boat docked at Pier 6 in Sheepshead Bay.  Joe is standing at the rail.  In 1974, Joe, Frank, and Walter retired and sold the boat and business to Walter's son, Captain Kevin.  This is the first Dorothy B. on which Captain Kevin's oldest daughter Dawn fished and it is the source of some great fishing memories to include bushel baskets filled to the rim with plump cold flounder and burlap bags stuffed with mackerel. 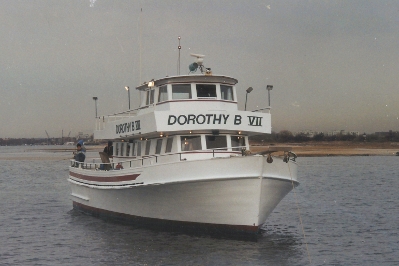 In 1980, Captain Kevin bought the seventh Dorothy B. and broke with tradition by including “VII” in the name as shown in this picture set left.  The “seven,” as we call it, brought more great memories to include a slew of giant tunas, big-bellied cod, doormat fluke, double-digit pound blackfish (tautog), and double and triple header sea bass and porgies.  It is also the place where Captain Kevin's youngest daughter Melanie met deck mate Sean who years later became her life mate and husband. 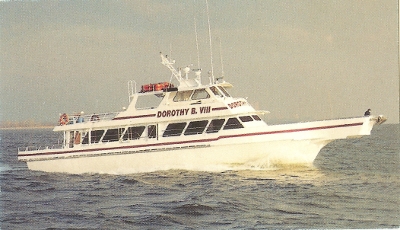 The Dorothy B. VIII was the first aluminum Dorothy B., purchased in 1996 and is shown in the final picture.  It was also the biggest at 90’ x 22’ and the fastest cruising at 20 knots.  On that high note, after 33 years in business, in 2007, Captain Kevin decided to retire to spend more time on land enjoying his four young grandchildren.  Two short years later, the salty air, the crisp waves, and the thought of catching just a few more big ones and making some great new memories on the water with his grandchildren (the fifth generation) called him back.

Come and join us as we look forward to making great memories with you aboard the 9th Dorothy B.!